Most of us, if not all, are afraid of what comes next…the big next.  Now, I’m not going to get mired down in a philosophical treatise on the afterworld or reincarnation, rather I am going to center on the simple act of leaving the life you know behind.  Death waits for us all, whether we want it to or not.  We worry about the state of our affairs, “who’s gonna support my loved ones, who’s gonna take out the garbage on Monday night,” and so forth.  The question that burns the deepest is, “how long before I am completely forgotten?”  At least if I am remembered, in some way, then I live on.

Those of us that blog, do so for certain reasons, like catharsis, or sharing beautiful moments, or introspection and trying to understand what it is to be human…reaching out with this to say that we are not alone.  We read the words of others to experience their human condition and to see not only what makes us different, but what unifies us as well.  Beneath all that, I think, that we yearn for immortality through our words.  Many of the bloggers I see have already published books, and in that alone deserve our respect and gratitude for adding to the chronicles, while some of us (yes me) are still finding our voice with hopes of one day writing the next Great American Novel.  Is that too much to ask?  If I can string the right words together, in the right sequence, I can live forever.  It’s wizardry.  We are trying to cast a spell, but if we do it wrong we could find ourselves lost in the oblivion.

This carries a lot of weight.  I have always allowed fear, more specifically the fear of failure, to paralyze me into inaction.  If I do nothing then I haven’t failed yet and the possibility of success is still there, but if I try and fail then the dream dies.  Now with age comes wisdom and I have learned at the intellectual level that this is false, that we learn from our failures and can always try again, but at the subconscious level I am still scared shitless.  A prime example of this fear induced paralysis was, for me, going to college.  I didn’t go right out of high school.  I went to work through temp agencies, at warehouses and factories and found myself having nervous breakdowns that bubbled up when I would think, “is this my life, am I stuck?”  I had always wanted to go to college, but the fear told me that if I go and I flunk out, then factories and warehouses will be all that’s left for me.  It took every ounce of my resolve to fill out the paperwork, but in the end…I flourished.  I loved it.  I wish I could be a career student to this day.  Now I won’t get into the irony that I am now employed at a factory in a managerial position, as it would change the tone of this entirely.  Rather, I am going to talk about hope.

As most of you know, I am now the proud father of a beautiful almost-five-month-old son.  Now, as much as he can serve as a wondrous distraction, he has also given me my immortality (at least that’s how I see it).  He looks so much like me that it’s like having a window into my own infancy.  I’ve always been fascinated by the idea of my future self sending my current self a letter that not only explains what’s coming, but the right decisions to make to get there…perhaps this’ll be a future post.  Now I know this concept seemed a fantasy, but it will happen…not for me, but for my son.  I am the letter from his future and hopefully with my help he can make the right decisions and avoid certain pitfalls.  Okay end of tangent.  This newfound immortality means that it isn’t all riding on me becoming the next Stephen King.  I can begin to write with a sense of insouciance.  The weight has been lifted, by the hands of a 17 pound, almost-five-month-old mini-me.

So, watch out world…here I come!  Right after I change his diaper and I figure out a new way to  make him smile and laugh. 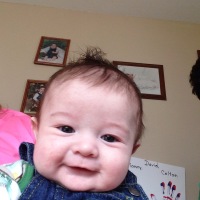 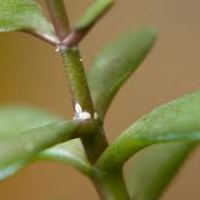